© 2013 VT SIL
The identification of an occupant walking through a building is important for building security. The underfloor mounted accelerometers that are instrumented throughout Goodwin Hall allow for individual identification at a distance by measuring a walker’s gait (i.e. the movement of the human body). Gait is a proven biometric (i.e. identifier) and this technique of measurement will be robust to many of the difficulties faced by traditional measurement systems (i.e. line of sight, volunteer measurement, etc.).

The recorded gait measurements are manipulated and used as features (inputs) to machine learning algorithms. Machine learning is a branch of Artificial Intelligence that seeks out patterns in large datasets, making the large quantities of data recorded by the many accelerometers in Goodwin Hall a natural application of these types of algorithms. The methods used in data collection, possible data reduction types, construction of features, and types of machine learning techniques are all currently being investigated.

© 2013 VT SIL
Permanent instrumentation of an active building is not a trivial task, and thus requires a large amount of research in order to be accomplished correctly.  Permanently instrumenting a building that will be occupied on a daily basis requires that standards be met at various levels such as health and safety and fire code.  As part of this project we look to set new standards in infrastructure instrumentation and set the path for other permanent projects. Besides the initial issues with sensor placement and building codes, there is the need to develop sensor mounts that will not interfere with the measurements being made. Wiring logistics are also non-trivial as several miles of sensor cable, as well as network access, need to be determined and routed throughout the building. Sensor location choice is also a crucial, as the entire goal of this project is to place sensors strategically such that they will yield the information needed to study the building in several aspects.

3D rendering of the Signature Engineering Building through LiDAR

© 2013 Tucker
This work headed by Dr. Tucker, associate professor in the School of Visual Arts at Virginia Tech, is concerned with the development of a very accurate (± 0.001m) real 3D model of the Signature Engineering Building. A LiDar system capable of taking 1,000,000 frames every 10 minutes is used to create a 3D virtual environment where sensor data ca be visualized. This will also allow all sensors to be accounted for in the building, and the location and orientation of each sensor will be very accurately measured (a very difficult task in such a large environment).  Some example videos of this work are shown below. 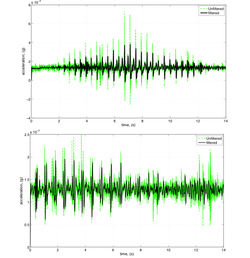 © 2014 Hamilton
The detection of human motion is a vital part of protecting secure structures and is of interest for optimizing system resources in a building. One technique to detect human motion is measuring the seismic activity from footsteps with the use of accelerometers. This project studies the floor vibrations of human footsteps in an office building as observed in different scenarios. Accelerometers were mounted under the floor on the supporting structure, and measurements were made of human motion on both the floors above and below the sensor. These measurements are currently being examined to quantify the success in detecting human motion patterns and identify a threshold for doing so.

Indoor Localization and Tracking of Persons

Existing geolocation technologies such as GPS and cellular-based localization are known to be unreliable indoors.  This research proposes measurements of building vibrations as a novel means of detecting, locating and tracking persons by the vibrations their footsteps create.  Vibration propagation in a building's structure is markedly different than that of radio waves.  Thus, an important contribution of this research the adaptation of wireless-based localization techniques for localization based on vibration signals in structures.
The figure illustrates the results from a prototype algorithm showing the locations of the under floor sensors (green squares) and estimates of individual footsteps (red x) generated by one pedestrian walking the length of a hallway. 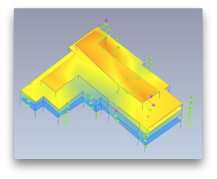 To better understand engineering modeling capabilities at such large scales it is crucial to validate models against sound experimental data. Building validation is highly complex, difficult to obtain, and very expensive. Additionally due to the fact that it is very difficult to excite buildings we rely on external uncontrolled methods of excitation to get representative data.  This has lead our efforts to work on more efficient methods of data processing to carry out large scale and accurate Operational Modal Analysis of Goodwin Hall. 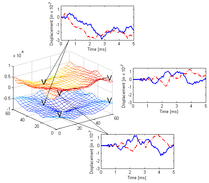 © 2014 Woolard
Before we can track and characterize human motion in a real environment, it must first be achievable through modeling. To do this, we are currently developing codes to model the ground response to human footsteps. This process begins by first modeling a human footstep and then incorporating it into a floor dynamic model. With this information we can begin to predict the details of our tracking and characterization algorithms, giving us more insight into the potentials and limitations of future experiments. 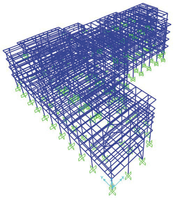 2014 copyright Leon / Eatherton
The analysis of acceleration response histories measured from Goodwin Hall can be beneficial to assessing both the short and long term structural properties of composite floors and the behavior of entire steel structural systems. With an advanced mathematical model of the structure, the changing dynamic characteristics of the building may be correlated to output from the sensors to develop measures for damage detection.  When verifying through non-destructive testing methods, the model can be used to simulate structural damages in terms of properties that may reduce its strength, stiffness and deformation capacity from the original design.  The time series from the accelerometers will be evaluated using spectral and modal analyses to detect the changes in such properties.  Structural health monitoring of the building can lead to better maintenance strategies that keep structures in safe operating conditions and extend their useful life. 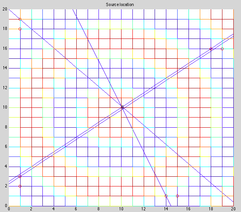 © 2014 Leullieux
In order to experimentally detect the origin of a vibration source, different methods can be used. The beamforming method for example, widely known and used in acoustics as part of a sound source detection can be adapted to respond to our needs. Using pairs of sensors and the difference in time between these reception, we will be able to identify the location of the vibration source. The parameters affecting the accuracy of the system such as the spacing of the sensors, the distance between the sources and the sensors, the exterior disturbance will also be take into account.

Although accurately knowing where sensors are located in a test structure is important it doesn't always lead to research potential. In most cases careful hand measurements will lead to very accurate sensor locations which can be used for validation of theoretical models. In the case of a 160,000 square foot building accurate sensor location is a huge challenge and a serious research project. Miscalculations in sensor location can lead too incorrect validation and assumptions on building dynamics but are also highly detrimental in our work of human localization and classification. The use of the LiDar plays a crucial role in extracting an accurate sensor grid that can be used by the rest of the research projects. 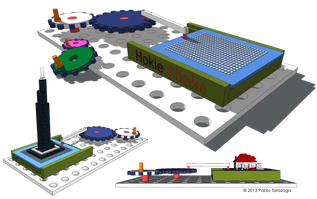 © 2012 Tarazaga
The determination of the dynamic properties of a building is necessary for insuring a safe and robust building design as well as for use in the detection of possible structural damage, which can occur after large loading from seismic events or weather-related loading from wind or snow. Any changes in the dynamic properties of a building can potentially indicate that damage has occurred.  The dynamic properties of a building can be determined by monitoring output from sensors, such as accelerometers, that are mounted on the building. In order to better understand the dynamic response of buildings, structural models are often studied on a small scale, where a “shake table” is used to demonstrate and analyze a building's dynamic response. The current construction of the new SEB provides a unique opportunity to embed sensors in the building and develop a small-scale seismic response demonstrator to create a “living laboratory,” where students and visitors can learn about the design and dynamic analysis of buildings. The VT undergraduate ME4015/6 senior design project team will be responsible for the development of the shake table demonstrator, which will illustrate the engineering concepts associated with the design and dynamic response of buildings, in support of the SEB living laboratory. Additionally, ME4015/6 team members will support the establishment of a network of sensors throughout the SEB to monitor the building’s real-time dynamic signature in order to integrate the actual building response into their shake table demonstration design. This design project provides a benchmark for the development of several unique educational and research programs.

Modal analysis of the Huckleberry Bridge in Blacksburg , VA